Brandy's Special Surprise for her Girls.... 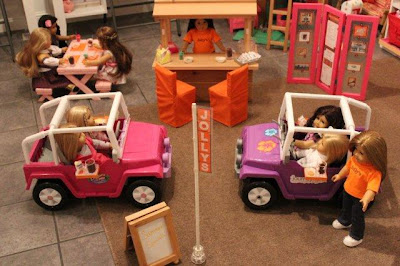 Brandy continues to impress me with her creativity and though she takes very little credit she is so talented at creating doll play sets by combing a love of American Girl Dolls, Creativity and Furniture items she purchases from Payne Street Doll Boutique  .
As a surprise for her girls as a end of year gift Brandy has created a play set that has special meaning to her and her family. Here is how and why she did it... 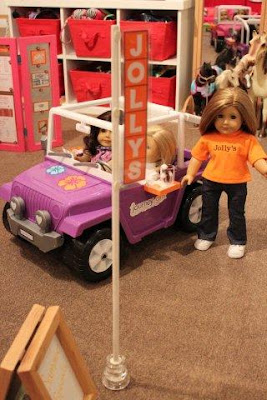 "The idea for this craft came a few months ago when my husband and I were
having a family movie night with our daughters.  We always have a snack.
Jayla has always been a lover a root beer and Jemma loves her potato chips.
While we were getting ready to snuggle in for the movie, the girls asked me,
“Momma, what is your favorite root beer and potato chips?”  Well, I
immediately had flash-backs of my home town of Tiffin, Ohio.  My favorite
root beer would have to be from Jolly’s and my favorite potato chips would
be from Ballreich’s.  I moved out of state with my parents just before I
turned nine years old.  We always made it a point to stop by Jolly’s when we
came back to Tiffin for a visit.  I can’t think of a time when we didn’t
bring back a few bags of Ballreich’s potato chips too." 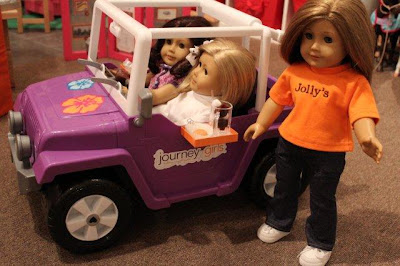 "So, feeling very nostalgic for my hometown…and feeling crafty…AND as most of
you know that my daughters LOVE their American Girl Dolls…I decided to
surprise my them with a Jolly’s Drive-In, serving Ballreich’s potato chips,
of their very own." 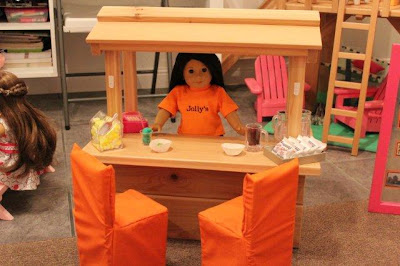 "First I started with their Payne Street Doll Boutique tiki hut.  When I
think of Jolly’s I always think of ORANGE.  I wanted to bring in as much of
that color as possible.  I made orange chair covers for the bar stools.
Next, I made orange place mats for the Payne Street Doll Boutique picnic
table.  I used a previously made galvanized steel tri-fold backdrop to
display menu and picture items.  I glued these pictures to orange and brown
paper to really add some extra color!" 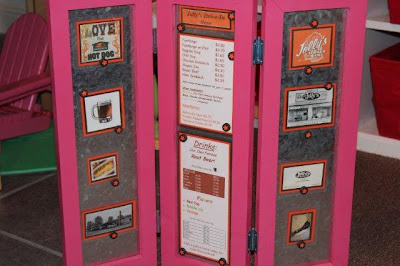 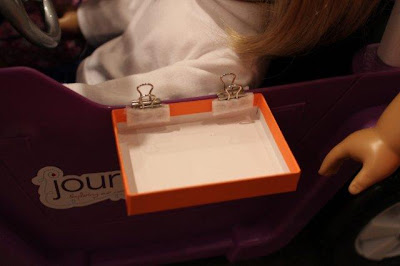 "For the drive-in trays, I used orange jewelry boxes found at my local
Michael’s craft store.  I used ½ inch silver binder clips to attach the
trays to the car doors.  I did cover the clips with white felt to prevent
the doors from getting scratched up." 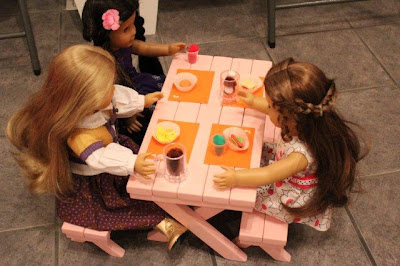 "For the root beer mugs I used beer mug shaped plastic shot glasses.  For the
root beer I used 2 inch brown pom-poms. For root beer floats I used smaller
brown pom-poms and mixed them with white pom-poms.  For the flavored drinks
I used red, green, orange colored pom-poms and placed them in communion
cups.  For straws I used clear cocktail straws and cut them down to size." 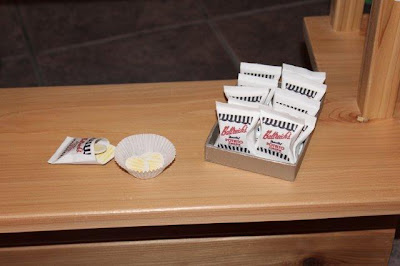 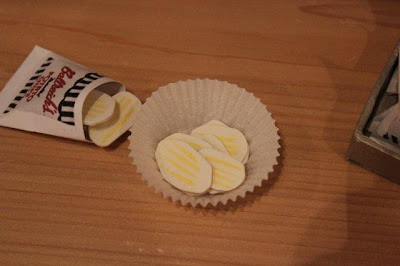 "For the Ballreich’s potato chip bags I printed off downloaded pictures on to
card stock paper.  I folded the sides of each piece of paper in and glued
together.  Then I glued the bottom edge and slightly folded it up.  I
pinched in each side of the bag to make it stand up a bit.  I filled each
bag with tissue.  I then glued the top edge shut and slightly folded it
down.  I left one bag open at the top and filled it with potato chips.  For
the chips I used a vanilla shade of foam paper, cut in to several small
irregular ovals.  Using a marker, I made several lines down the front and
back of each oval for ridges." 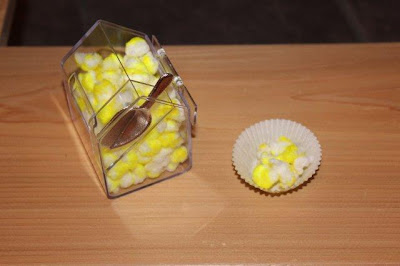 "The popcorn machine was a little container I found in the dollar bins at my
local Michael’s craft store.  For the popcorn I used 2 or 3 cotton balls…I
moistened my fingers with water and pulled off a little cotton and rolled it
into a ball between my fingers. I did this several times.  I made several
irregular and different sized balls to make it look more authentic.  Them I
took a yellow marker and made a few marks on each ball.  Let them dry and
then placed in the “popcorn machine.”" 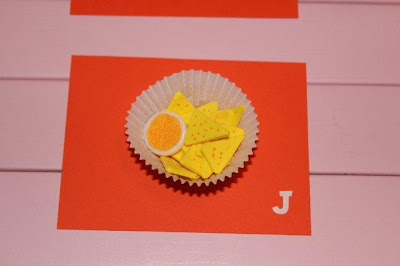 "For the nachos and cheese I used yellow foam paper and cut it into several
small triangles.  I then took a light orange marker and made a few dots on
each to give it a textured and spicy look.  I used light orange felt and cut
a tiny piece into a circle and then glued into a button for the dipping
cheese.  I placed everything in a mini paper cup cake wrapper to serve." 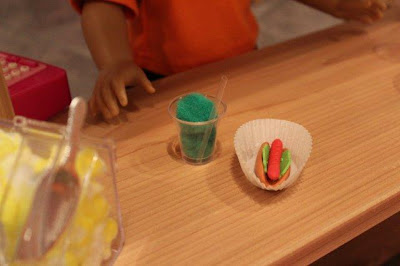 For the hot dogs and sandwiches I used erasers found in the birthday favor
isle of my local Target store.  I served them on mini white paper cupcake
wrappers. 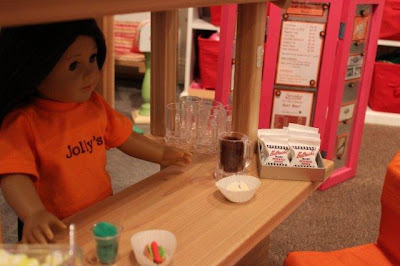 "For a little extra flare I found orange doll shirts on ebay.  I took them to
a local embroidery shop and had “Jolly’s” in brown letters embroidered to
the front."


I want to thank Brandy for allowing me to share with all of you her doll play ideas and I hope you are inspired to create special time and doll play items for your loved ones as I am when I see what Brandy has created.

As with all my posts I would love to hear from you so please leave me a comment here or email me at karenmowen@gmail.com 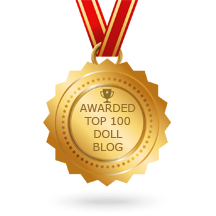 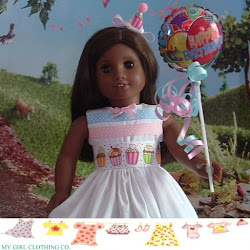 Beautiful Creations for your Dolls 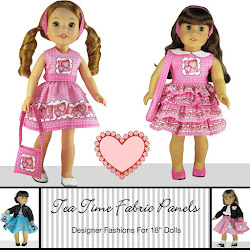 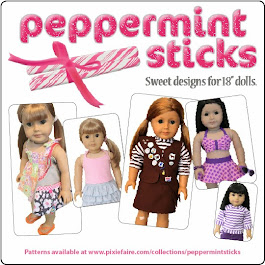 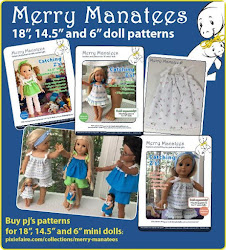 Patterns for your 6” mini dolls! 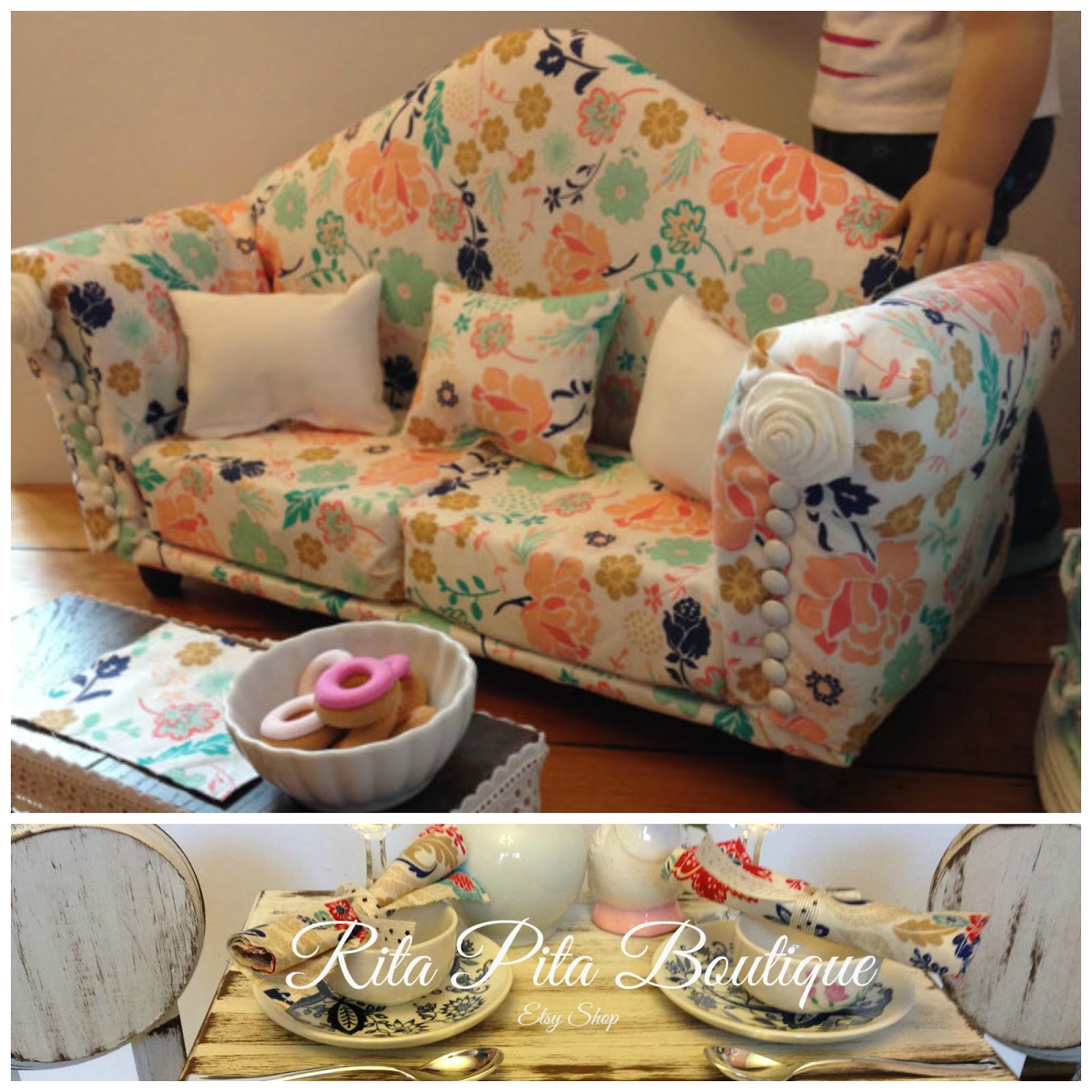 See what Brandy is up to at home!

I am available as a guest speaker for conferences, church groups, girl guides, birthday parties, craft parties ,group organizations as well as doll related conventions. Please contact me for further details at karenmowen@gmail.com 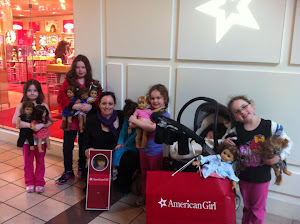